Julia has been ported to the Pi, allowing scientific researchers, data analysts and hobbyists alike to experiment with the next-gen programming language.

Viral Shah, co-creator of Julia, explains to us that “workstations crunching data is the typical picture” for scientific computing, but “I just got myself a Pi 3 and a Sense HAT. With all the computing power and sensors there, it makes sense to crunch data on the device itself.”

Julia can be used for less serious applications as well as more complicated tasks. 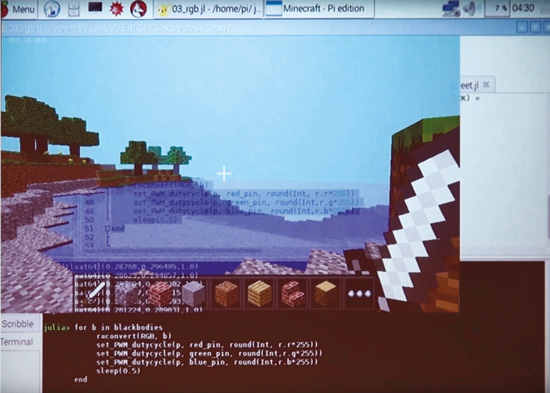 Julia isn’t just for scientific analysis, crunching huge data sets, or statisticians, though. “Julia was designed to solve the two-language problem: the speed of C++ and Fortran with the ease of use of Python. There are increasingly many application domains where Julia is a great fit.”

We’ve seen demonstrations of Julia being used to hack Minecraft, and to build the AI in an autonomous RC race car. Julia currently offers support for the Pi’s GPIO, the Sense HAT, and Minecraft Pi.

Running Windows 9x software is usually a faff, but it’s easy if you emulate the entire OS. Get the classic Windows experience with Raspberry Pi and DOSBox-X