A carrier board is just like a motherboard for a desktop PC, with the Compute Module (CM) acting like a plug-in processor. Just as with a typical motherboard, different carrier boards offer different features.

The Raspberry Pi Foundation offers the Compute Module IO Board V3 as part of a development kit, but resin.io’s Project Fin has a few extra features on offer.

For example, Project Fin has dual-band (2.4 GHz and 5 GHz) WiFi and Bluetooth 4.2, plus a connector for an external WiFi or Bluetooth antenna. The Bluetooth radio can even operate when the CM is powered down. The CM can be powered down or up by code, accessing Project Fin’s on-board real-time clock (RTC) chip.

A mini PCI‑Express slot enables the attachment of standard PC peripherals – a cellular modem, for example, which could work with the built-in SIM card slot. There’s also more robust power delivery, allowing input voltages of 6–30 V (or 5 V via the standard HAT connector). 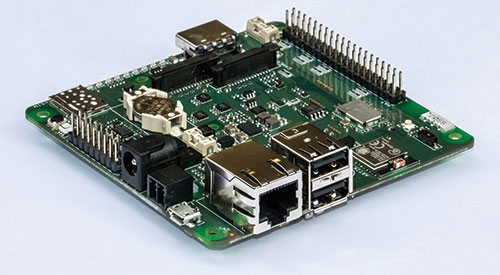 Carlo Curinga, resin.io’s Director of Technology Operations (Europe), also explains that Project Fin has “one of the best available eMMCs. Paired with strong power circuitry, this ensures fast and reliable operations… we avoid all the pitfalls of SD cards,” such as relatively short (in industrial terms) read-write lifespans.

Although Carlo confirms that while “Fin does support eMMC-populated Compute Modules”, the on-board eMMC obviously makes Project Fin ideal for the eMMC-less Compute Module 3 Lite (CM3L), based on the Raspberry Pi 3B.

Project Fin boards will offer 8–64GB of on-board eMMC, with the 8GB version given a target price of $129, not including the CM3L (which costs $25–$30). Alison Davis, resin.io’s director of product marketing and strategy, confirms that “we plan to make the first batch of boards available later this spring.” To keep up to date, email your interest to [email protected].