What is the best way to surf the World Wide Web in Raspbian? It is hard to overstate the importance of web browsers and how much we take them for granted. They are our access point to a universe of information, and they do a lot of work to bring us all this information in a readable format.

Raspbian has featured several default web browsers over the last five years, changing as internet access and power requirements have developed. Is the latest choice, Chromium, the best of the lot? We test some of the best browsers available to find out.

The full article can be found in The MagPi 59 and was written by Rob Zwetsloot. 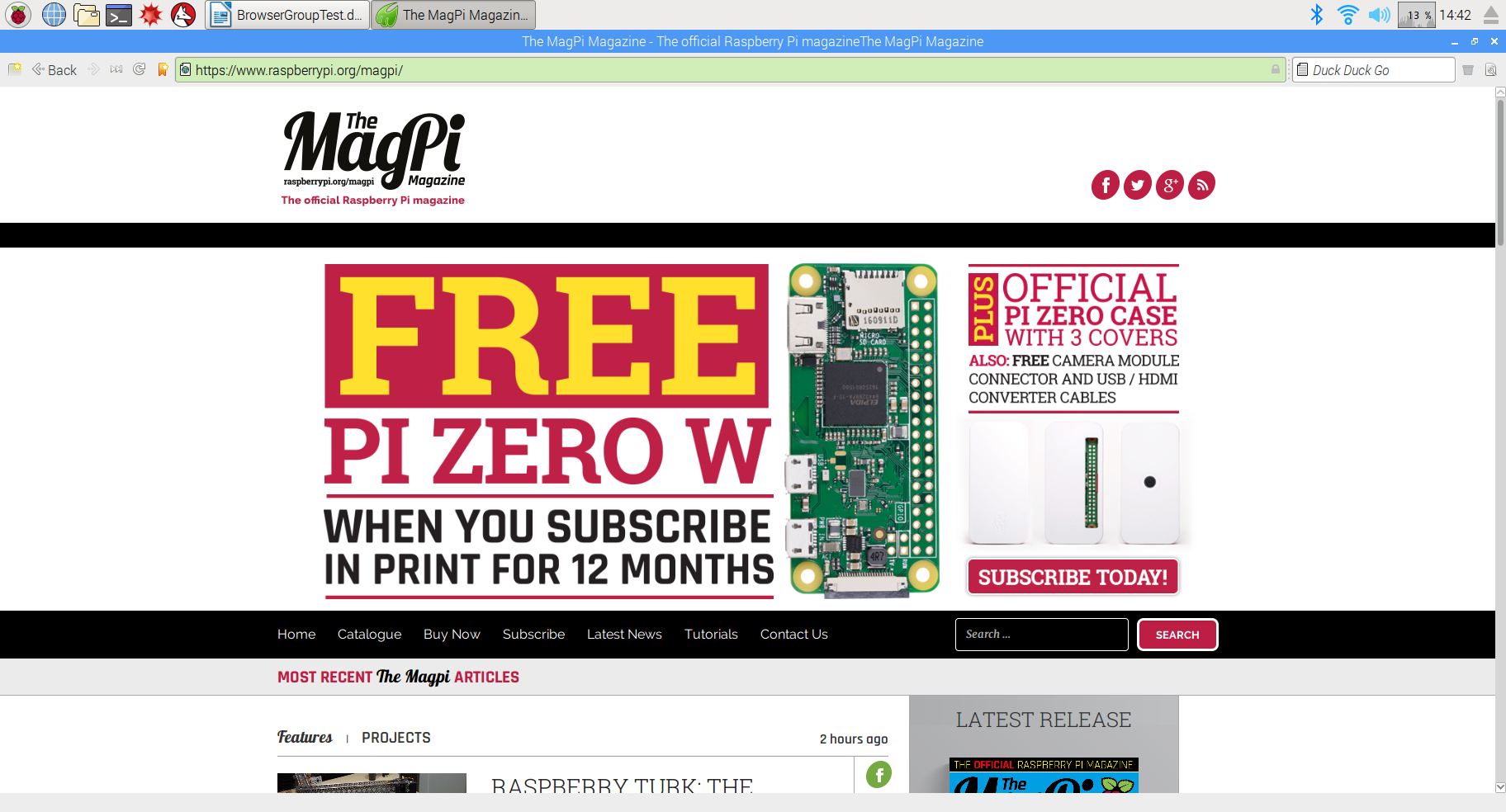 The original Raspbian web browser, well known as a lightweight browser for the Linux community, is suitable for use on a (relatively) low-powered system. It hasn’t been included in standard Raspbian releases since around the time of the Raspberry Pi 2 launch, so we went into testing Midori on our Pi 3 expecting it to outperform everything else.

Unfortunately, we were surprised to find it lagging as we used it. YouTube videos stuttered, and scrolling was only smooth on low-resource websites such as Wikipedia. Loading wasn’t particularly fast either. The lack of features, which should have made it fast and lightweight, did not seem to help, and this gave it a severe handicap. 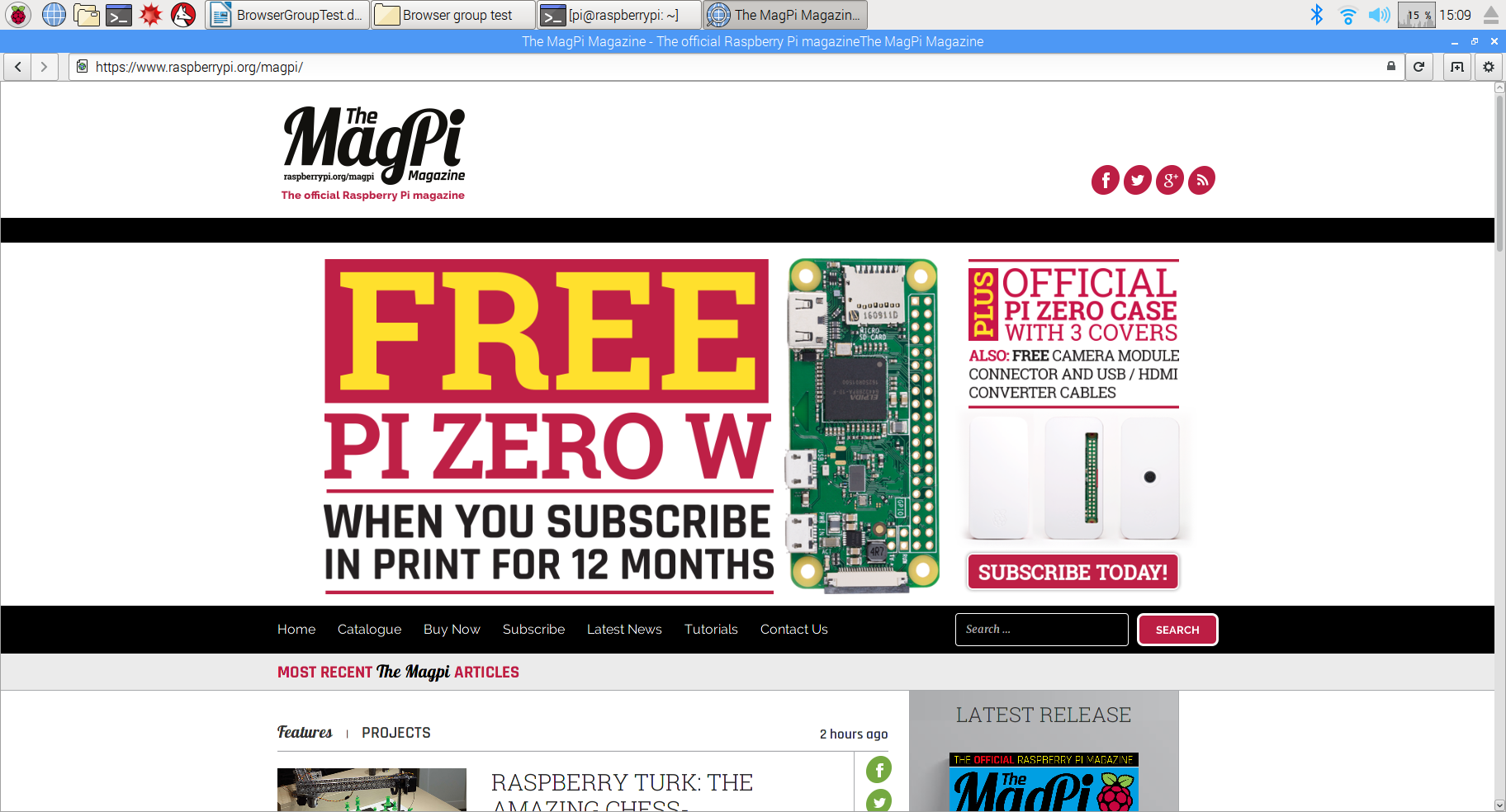 As with Midori, we had high expectations looking back at Epiphany. Known as Web in the GNOME desktop environment, it’s an often-overlooked browser that is usually singled out for being far too simplistic and basic.

Like Midori, it was once a default Raspbian browser, with a modified version used until recently when it was superseded by Chromium. Unlike Midori, it is optimised for use with the Raspberry Pi.

We expected our revisit to Epiphany would reaffirm our dislike for it, but honestly it still works well on the Raspberry Pi. Scrolling is relatively smooth, YouTube playback is fine, and juggling tabs is easy. It’s still heavily limited in what it can do, but it did a lot better than we expected. 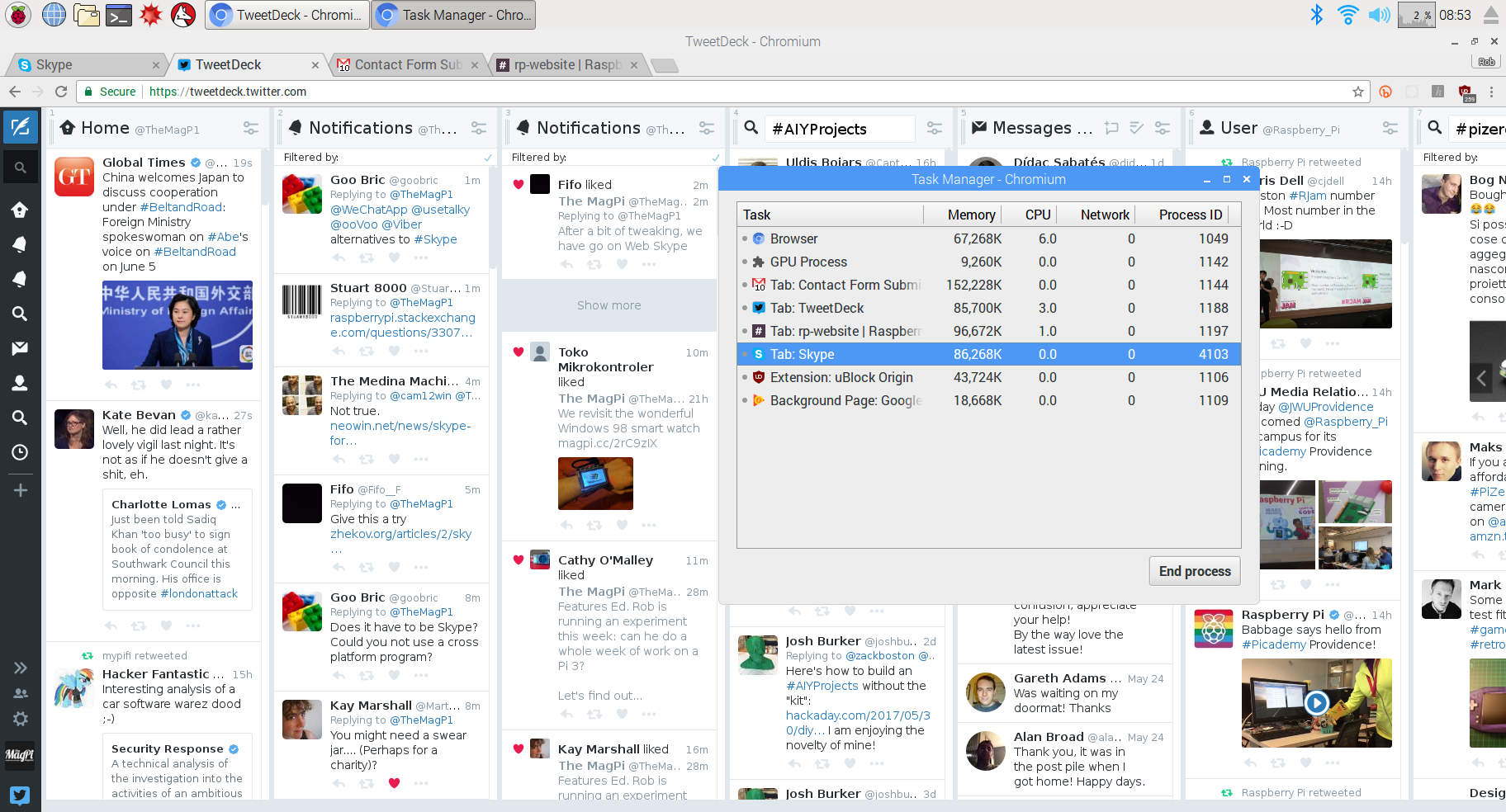 The current default browser for Raspbian, Chromium is the open-source base of Google’s Chrome browser. There’s not a lot of difference between the two, especially as Raspbian’s version has Flash installed.

On a normal PC, Chromium is relatively lightweight (especially if you’re using only a few tabs at a time), but even this slimmed-down version of Chromium for Raspbian offers good performance. The Raspberry Pi 3 has the power to handle it, and with enough oomph spare to run other software.

One of the benefits of running Chromium is that it also connects to your Google account. If you use Chrome or Chromium on your main PC, it lets you instantly copy over settings and apps, so it is easier to set up the browser to your liking. 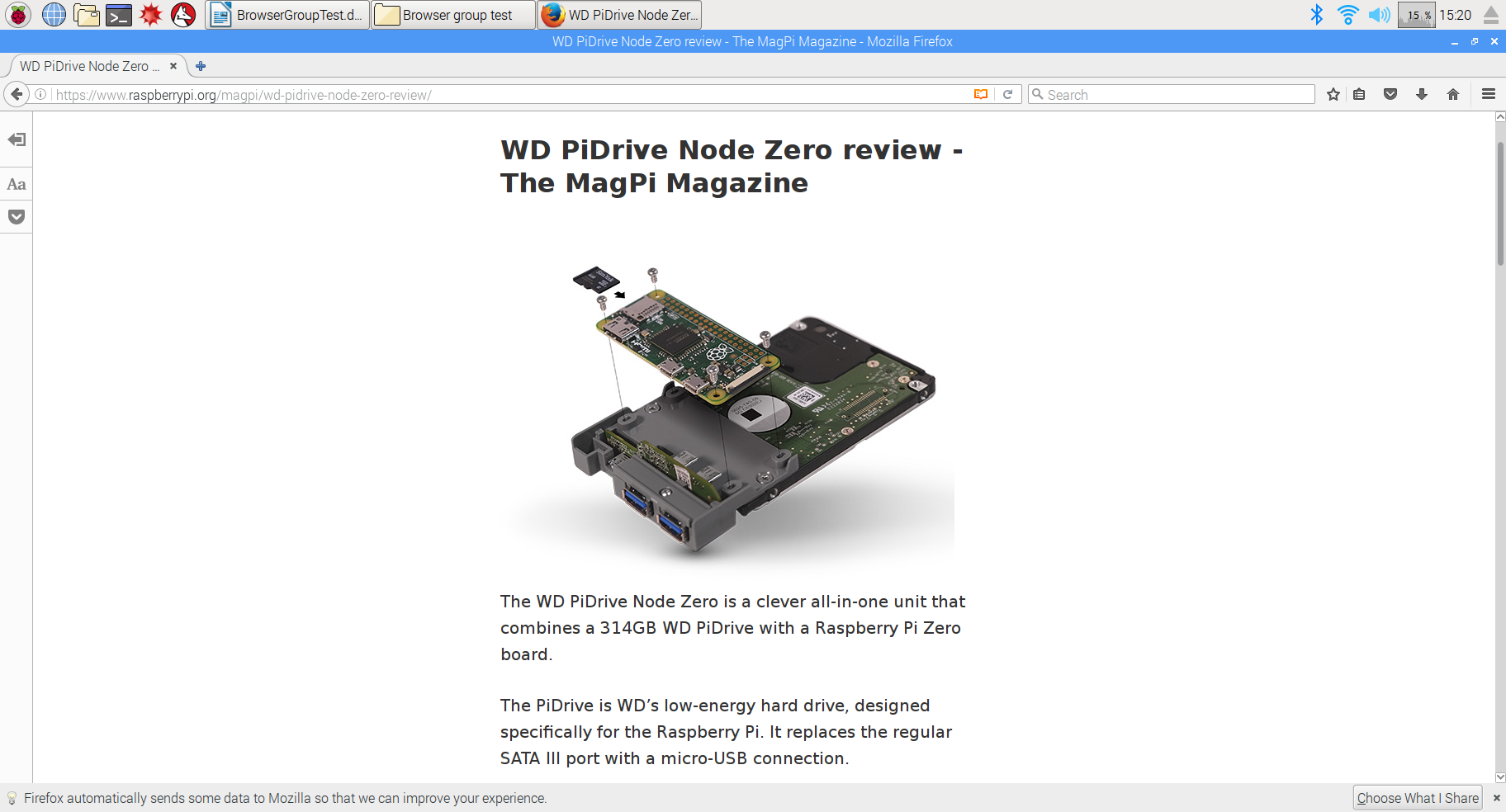 There’s a bit of weird history behind Firefox on Debian (the base of Raspbian), but the important thing is that it’s here now, and it’s in the form of an ESR.

ESRs are Extended Support Releases, slightly different to the main version of Firefox. Firefox usually updates every six weeks or so, but this version is sent security updates only until the next set of major updates arrives.

We were pleasantly surprised by the way Firefox worked on the Raspberry Pi 3. It loaded quickly, rendered pages well, allowed for smooth scrolling, and even played YouTube videos well; but what made it shine was one of its lesser-known features: book reader mode.

Book reader mode takes a blog-style post and strips the formatting down to a page with plain text and pictures. It reduces resource use considerably and works well with a Raspberry Pi, especially when you’re looking up tutorials or instructions. 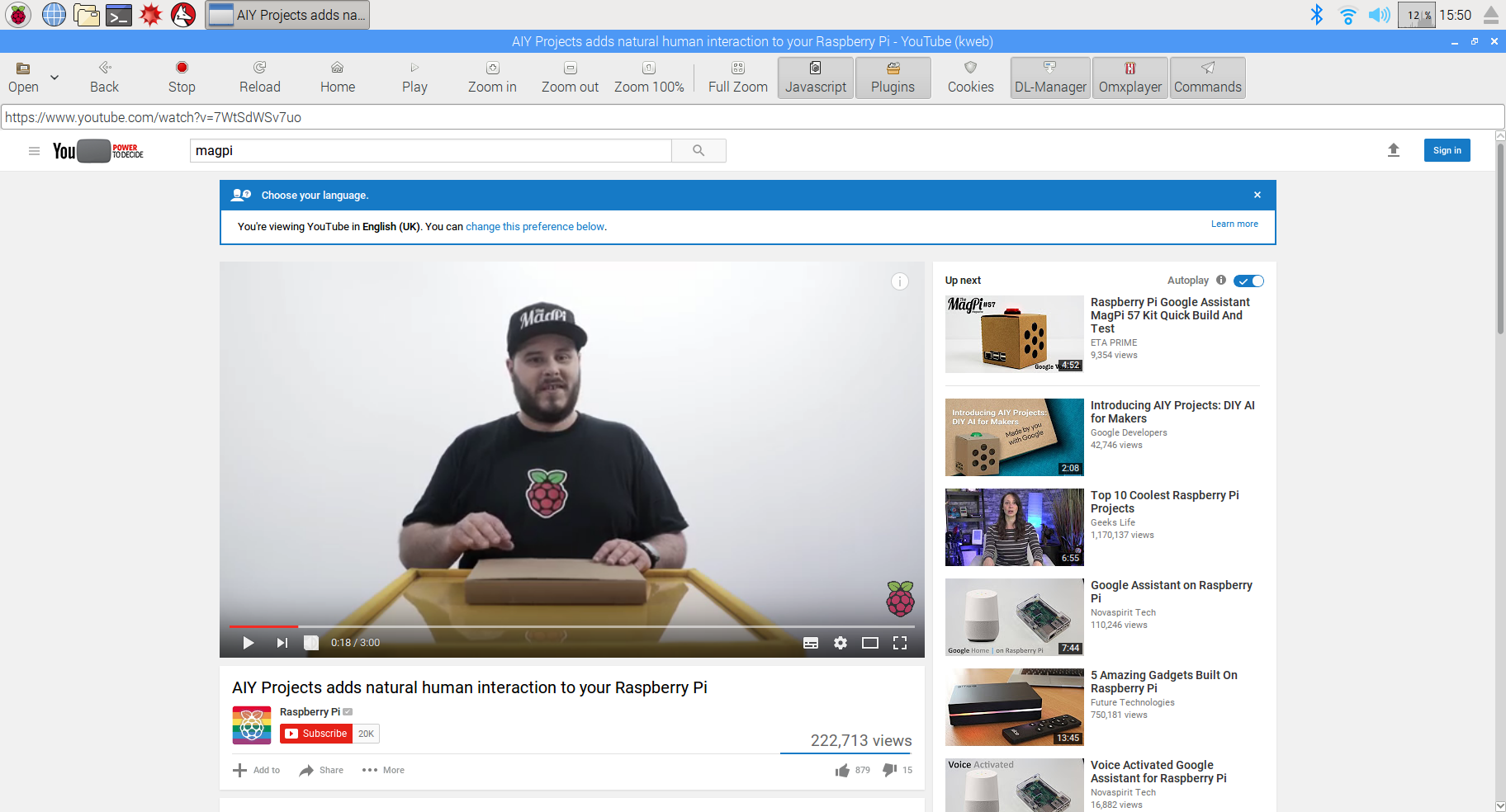 This is the only browser in this selection that has been made specifically for Raspbian, and in fact goes beyond the definition of a web browser: kweb is designed to be part of a Raspberry Pi-powered web kiosk.

Don’t let that deter you though, as it’s still well suited to standard web browsing. For people who are a bit more web savvy, kweb offers a range of options to customise your web browsing experience for maximum efficiency. This includes a button on the main interface that lets you turn certain features on and off, such as JavaScript, cookies, and more.

While it can be lightning fast, you do sacrifice many of the amenities of modern browsers to produce this great performance.

Chromium! We really liked using it, especially during our week of using the Raspberry Pi as our main PC.