Power your Raspberry Pi directly from a PoE-capable Ethernet socket

Power over Ethernet (PoE) has been a much requested Raspberry Pi feature from the community. The ability to access power and network along a single cable could prove tremendously useful in a range of deployments. Our Raspberry Pi PoE HAT (£18 / $20) review looks at the official solution from Raspberry Pi.

Until now, third-party solutions have been available, most of which add a second Ethernet socket via the HAT and then pass power on to the USB power port.

However, the Raspberry Pi 3B+ added four extra GPIO pins specifically to support PoE options and subsequently announced this PoE HAT, a Class 2 device for drawing power directly from a network.
This is a more elegant solution that draws its power directly from the Ethernet connection on the Raspberry Pi 3B+ and transfers the power via the four new GPIO pins on the board, while simultaneously enabling a direct network connection.

The PoE HAT board uses a custom-built isolation transformer (this is the small white circuit) to turn the 37–57 V DC from Ethernet to a Raspberry Pi-acceptable 5 V.

The isolation transformer doesn’t need much space, and the designers have decided to double up with another oft-requested feature: a fan.

All of this makes the PoE HAT an appealing addition to the Raspberry Pi, especially for industrial users.Being able to draw power from a network makes the Raspberry Pi easily deployable away from electrical sockets. And the presence of a fan provides a layer of security when using a Raspberry Pi long-term in a hot environment.

Because the 3B+ is the only Raspberry Pi to feature these additional PoE pins, you must use this HAT with a Raspberry Pi 3B+ (no other model is currently supported). 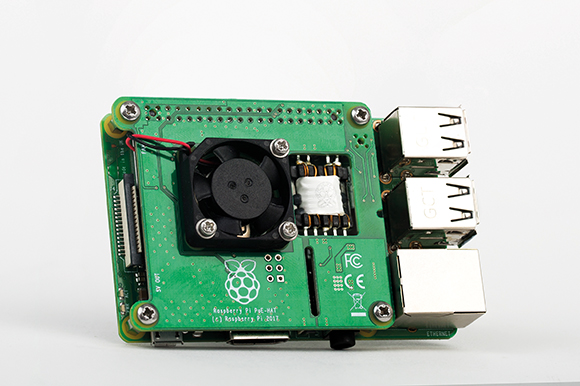 Connecting the Raspberry Pi PoE HAT to the Raspberry Pi 3B+ is a simple 30-second job. The HAT connects directly to the 40-pin GPIO header (and four-pin PoE header) on the 3B+ board.
Four standoffs and eight screws are used to keep it in place. Then it’s simply a case of connecting a PoE-enabled Ethernet cable to the Raspberry Pi board. It then boots up without the requirement of the USB power cable. A slot for the Pi Camera Module enables you to feed its cable through.

It is possible to add a riser to the HAT to extend the GPIO pins out, in case you wanted to add a second HAT or access the GPIO on the Raspberry Pi. The HAT uses I2C to interact with the Raspberry Pi.
At this point, we must stress the requirement that you have a powered Ethernet connection. Most household routers provided by the likes of Virgin and BT do not supply power over the Ethernet connection. Neither do many power-line adapters. Check that you have your PoE system in place before setting up the PoE HAT.

For this test, we used a TP Link Gigabit PoE Injector connected to a Virgin Media HUB 3.0 broadband router.

Once assembled, the Raspberry Pi 3B+ and PoE HAT would not fit inside the Raspberry Pi official case. It may well be that a case option is available down the line, but the product brief says ‘This product should be operated in a well-ventilated environment and, if used inside a case, the case should not be covered.’ 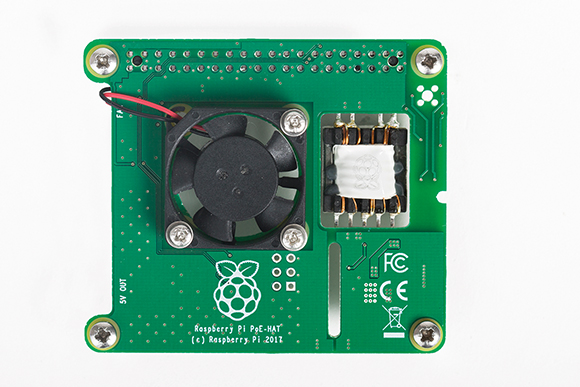 The PoE HAT conforms to the 802.3af PoE standard (magpi.cc/cDxYYm) and on the board is an isolated switched-mode power supply. It’s a 37–57 V DC, Class 2 device that provides the 5 V/2.5 A DC output used by a Raspberry Pi.

In terms of testing, we powered it up and used it without a USB connection plugged in.
In terms of networking, the Ethernet connection remains a Gigabit connection running via the USB 2.0 sockets and thus limited to 200Mbps. We found no network difference using the PoE HAT.
A more interesting test is the fan, which in our testing knocked roughly 10 °C off the CPU temperature.

Neither the HAT, the powered Ethernet cable, nor the isolated switched-mode power supply generate any additional heat, so the fan isn’t a required component for PoE Ethernet support, but it will be a good addition for users in high-temperature environments.

This is ideal for folks who use the Pi intensely and worry about the long-term effects of stressing the CPU without any form of cooling.

A fantastic solution to a long-requested feature. The PoE HAT enables the Raspberry Pi to draw power directly from a powered Ethernet connection. The bonus inclusion of a fan enables you to run a Raspberry Pi for long periods in hot environments with confidence.