The demonstration was part of SciBite’s setup for the Bio-IT World show in Boston, USA, where SciBite won an award for Best of Show in the Analysis and Data Computer category.

“The show went really well,” SciBite marketing manager Monica Kulkarni tells us, with a “great reception for the Pis. People came to the stand just to see the demo.

“The great thing about using the Pi cluster,” Monica continues, “was that when the internet connection went down in the exhibition hall, we could carry on demonstrating, as the Pis ran on their own local network.”

SciBite went on to win a Best of Show award at Bio IT World 2017:

We chose Raspberry Pi, not only because their machines perfectly display the flexibility and adaptability of our solutions but also because of the ethos behind the Raspberry Pi Foundation. Their actions to democratise the digital world and bring coding to the next generation are inspirational, and we’re proud to support their work. 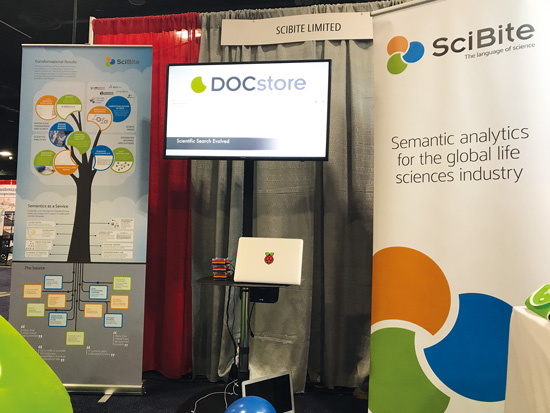 ‘Semantic search’ is a method of information gathering far in advance of using a standard search engine, Monica explains. “Controlled scientific vocabularies” allow the TERMite semantic search tool to understand that “for any given concept, there may be multiple synonyms for a singular term. Schilder syndrome, Alpers’ disease, Christensen disorder, Encephalitis periaxialis are all the same disease.” The “tens of millions of synonyms provide the depth of knowledge required to understand biological text.”

However, ambiguity is also a problem, with a single word having many meanings, and therefore producing either irrelevant or misleading search results. “Contextual disambiguation is critical to ensuring accurate insight,” confirms Monica.

TERMite, and the DOCstore front-end that accesses it, is platform-agnostic (it’s a Java app with a browser-based UI), but developing for the Pi wasn’t just for fun. Squeezing the TERMite vocabularies to run on the Pi’s 1GB of RAM was a challenge, but “some of the techniques we used to compress and efficiently scan data … are already finding their way into next release of TERMite.”