The Tiny 4WD is close, but not identical, to Brian’s remote-controlled robot detailed in issue 51 of The MagPi. “The reason for the change to the Pimoroni pHAT,” Brian tells us, “was to get the price of the kit below £60. If a ZeroBorg was used, the kit would have been closer to £90 to £100.”

The Explorer pHAT also “has buffered 5V inputs/outputs plus four analogue inputs, allowing a range of sensors to be added.”

When selecting motors, Brian advises “the 50:1 ratio [motors] are a great choice for general use. A higher ratio, say 20:1, makes the robot into a more sporty model, [but] turning on the spot and climbing is not as good due to lower torque. For computer vision and sensors, the 298:1 motors are more suitable, due to the lower speed.”

You can buy the CoreTec Tiny 4WD Robot Rover kit from Pimoroni for £55. 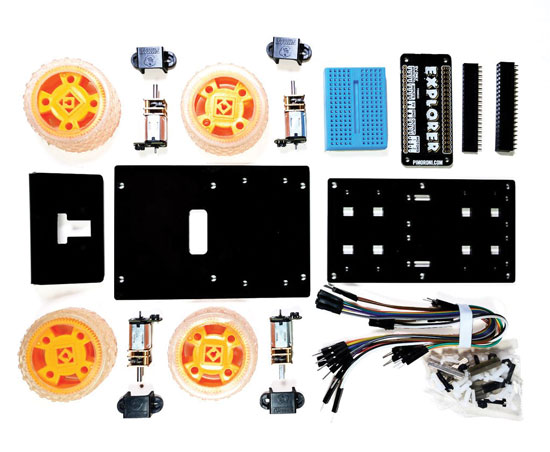