Adding four USB ports to the Pi Zero, can it replace a USB hub?

While the Raspberry Pi Zero’s compact nature makes it ideal for many projects, the downside is that it only offers a single micro USB port for connecting peripherals. So, to use it with a keyboard and mouse, for instance, you’ll need a USB adapter and a standard USB hub. Well, not any more…

Designed by UUGear in the Czech Republic, the Zero4U is a four-port USB hub that’s mounted on the rear of the Pi Zero. Its four pogo pins connect to the tiny PP1 (+5V), PP6 (GND), PP22 (USB D+), and PP23 (USB D-) testing pads on the Pi Zero. This enables it to take its power from the latter, in which case it can output up to 2A current to all four USB ports.

Since the pogo pins are only in surface contact with the pads, they need to be kept firmly in place by securing the Zero4U to the Pi Zero using the plastic standoff screws and spacers supplied. We were slightly concerned about the pins maintaining a reliable contact, but didn’t experience any problems. One detail to note is that since the testing pad positions are slightly different on the two Pi Zero models – the original v1.2 and new v1.3 with camera connector – there are two versions of the Zero4U to suit, so you need to ensure you order the correct one. Either way, the Zero4U can also be used with any other Raspberry Pi model via its mini USB input, although the power output is reduced in this case unless you power it independently via its JST XH2.54 port.

Once the Zero4U is piggybacking the Pi Zero and powered on, a blue LED lights up to show that it’s operating. In addition, each port has a white status LED that’s lit whenever a device is connected to it, which is a nice touch. All four ports operate at standard USB 2.0 speed (480Mbps). The only caveat is that if you insert a USB 1.1 device, they’ll all be slowed down to 12Mbps, since the hub has a single transaction translator, but it’s not a major problem. 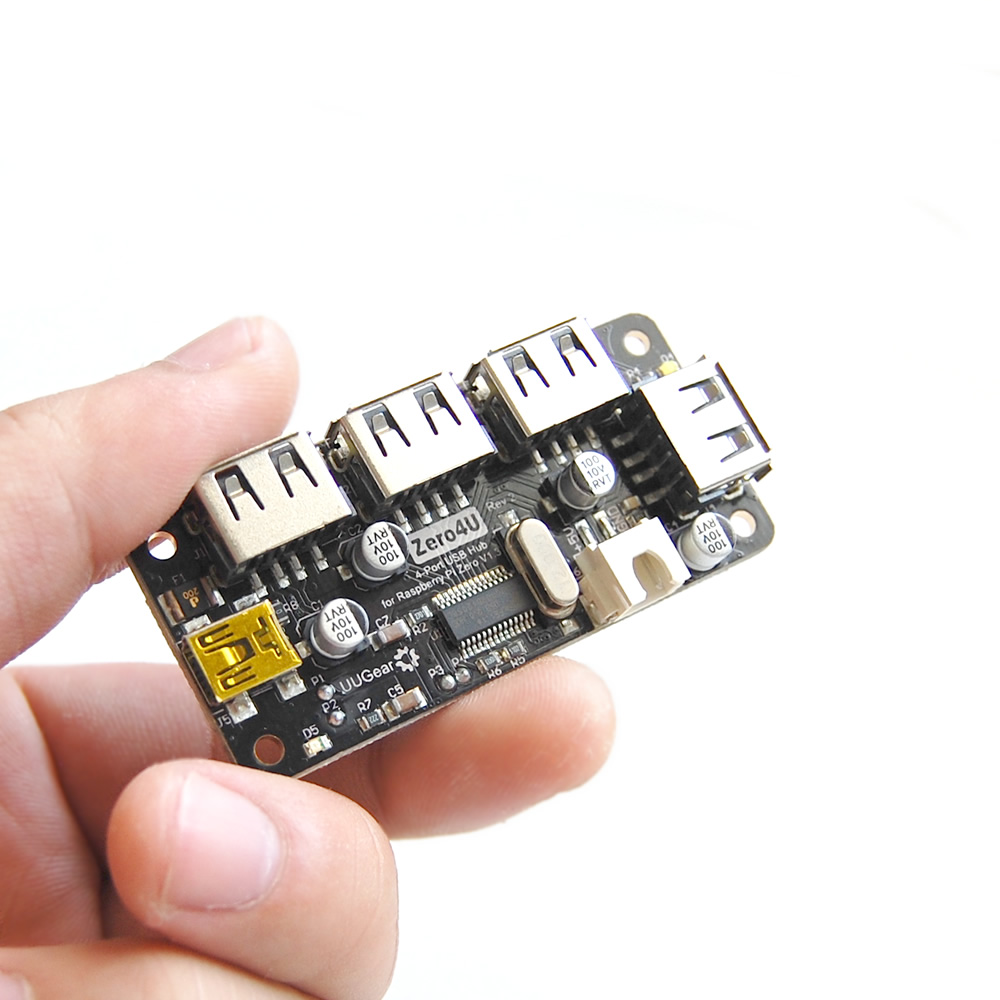 The Zero4U is an ingenious solution to the lack of standard USB ports on the Pi Zero. There’s no soldering required and it’s relatively easy to attach to the rear of the Zero, which means the GPIO header is kept free and unobstructed. As a bonus, the device can also be used as a standard USB hub for other Raspberry Pi models.